Running with motivation to ensure success 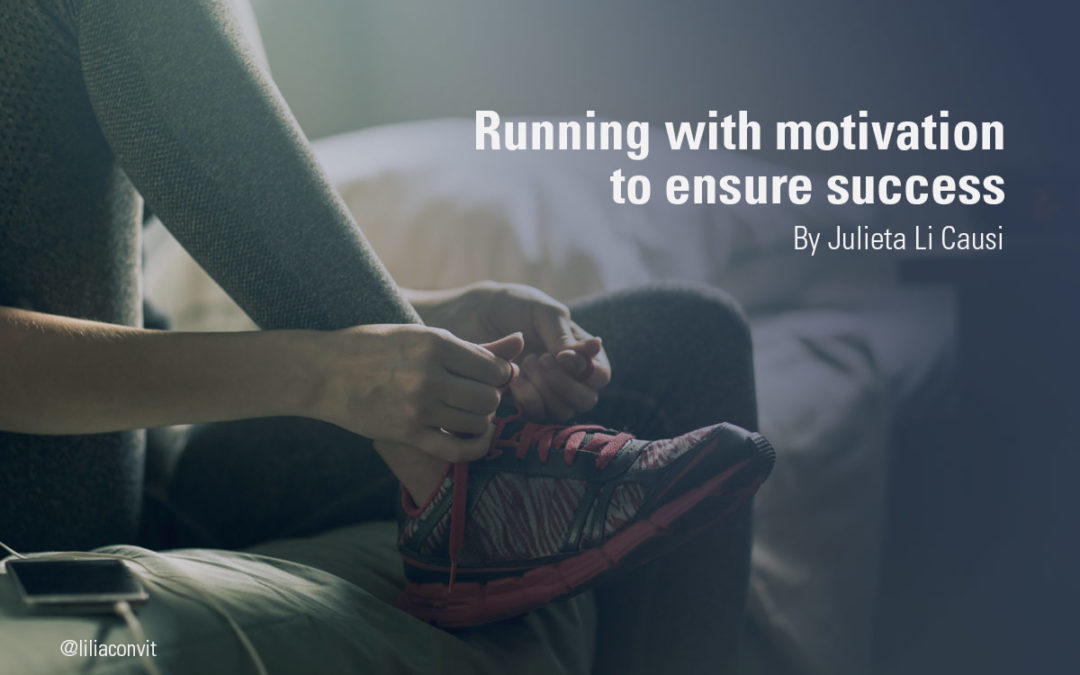 You’ve already made the decision to start running; you have some clothes to train in and some sports shoes that are as good as new. Now, let’s start! You may go for a run one day and continue for a few weeks, but if your work or home routine becomes complicated, you are very likely to see a change of mindset to something like “I do not have time to continue.” It turns out that to start in any sport or exercise routine, the first thing you need to have is a GOAL.

People’s goals for running are often associated with a particular social event where they want to look stunning after losing a few kilos or to wear a specific outfit. However, it is certain that if we just focus on a physical aspect or a short-term goal we will lose many important aspects of a goal that will allow us to continue with the maximum motivation and avoid quitting.

The positive effect of setting a sports goal that is, selecting a competition that you can attend and have enough time to train for, is very noticeable For beginners, the idea is to choose a run within the same city of residence or a few kilometres, so that it is easy to reach and money issues do not interfere if something does not goals we plan.

Now you may be asking yourself several questions about setting such a goal such as what is the minimum time should I train before the competition? Where do I get information about sporting events like this? Can I start with a marathon if I have never run before? These are the common initial questions in most runners’ minds as they prepare for their first competition, and of course, after these, many more will come!

How much time do I need to prepare for a race?

Preparing for any competition takes time, not only to train but also to achieve our goals in a pleasant way. Time is also important to promote healthy behaviour and achieve the habit of running.

The most recent studies indicate that in order to create a habit, an action must be repeated at least 66 days no matter if there are interruptions (remember that we are talking about the real world and not a laboratory).

These 66 days should be planned according to our commitments in an orderly manner. If we think of allocating five days a week to train we could be ready for a race in three and a half months after beginning training. These three and a half months will also guarantee that the exercise is progressive and enjoyable, in addition to creating a new habit.

Where can I find information about sporting events of interest?

You may be wondering, will there be a run available in three and a half months? The general recommendation is to search Google for words such as “running events,” “upcoming races,” “running in [name of your town]” to find upcoming races.

Likewise, there are many Facebook groups that help runners in many ways.  It is ideal to find a community of runners in a similar location and with similar training hours, age, monetary investment etc. Finding running partners is always a good idea; running is also a social event.

What is the recommended distance to start running?

A 5 km event is an excellent place to start. The average person can complete this distance in anywhere from 35 to 40 minutes at a pace of a gentle trot, having trained steadily for only a few weeks.

The world record for 5000 m is held by Kenenisa Bekele with a time of 12:37.35 minutes achieved in 2004 in the city of Hengelo, Holland. Amazing! This record is not supposed to be discouraging, but rather serve as a reference in case you want to become an elite athlete later.

It is important to remember that you are just starting out in the world of running and the main goal is to break the 66-day barrier to make running a habit. In less than a month of constant training, you will be able to run 5 km at a good pace. If you continue like this, 10 km will not sound so outlandish.

The world record for 10 km is of 26:17.53 minutes and again Mr. Bekele manages to position himself first in 2005 in the City of Brussels, Belgium.

If we go back to our reality and extrapolate from the time it will take to run 5 km, we can think about running our first 10 km in approximately 1 hour 10 minutes after following a successful training plan. Looking at it this way, in two months of training, running 10 km is possible and you can select a race of this distance you are excited about and that is scheduled for three and a half months after the start of training. It is important that you feel comfortable and that the distance you choose is one that you enjoy and motivates you to keep trying.

If on the other hand, you want to be more daring, the 21 km, or half marathon, is more than possible as well. Here is a small anecdote from my experience running a half marathon with a super group of runners; being part of a group of women runner has been a fantastic experience, one I think is worthy of replicating anywhere in the world.

In September 2018, the French store Decathlon located in the city of Mérida, Mexico, posted a message on Facebook looking for women who had never run a half marathon and wanted to do so.

In the end, there were 21 girls of different ages (20 to 43 years old), from different social strata and academic levels, etc. that responded; it was a very heterogeneous group. We all had very different running experience, so much so that, within the group, the person who had run the farthest was me with 17 kilometres 10 years ago and only during a workout. We met with a very fit trainer and with a good track record in the world of running every Saturday at 6 am for four months.

The coach was key to our success as he initiated and guided us during the four months that the program lasted. His enthusiasm for running captivated us daily because despite seeing him only once a week, we all communicated via a WhatsApp group where he not only reminded us of the training for the day, but also spoiled us with inspirational passages, stories of his great exploits, and much more.

As the group gradually got to know each other, the proposals to see each other another day in addition to Saturday, either for running or for coffee, began. Each member had something very valuable to contribute and unintentionally we created a group not only of runners but also of friends. These extra hangouts added significant value to the team; during these hangouts, we discussed running topics ranging from the tread of our shoes to the amount of carbohydrates that we each would eat before a fun or long run.

Two of the women in the group had never run more than a kilometre, so for them thinking of running 21 km was very intimidating; they had two options: follow through or resign. Ultimately, they decided to see it through with the rest of the other 14 girls who completed the half marathoner. If you do the math, you will notice that five people deserted and what is so interesting about this is that they were the least integrated into the group from the beginning; thus, we can conclude that social support is an important part of fulfilling your goals.

Injuries affected almost the entire team despite how careful the coach was in planning the training and the information he provided regarding good running technique. It was inevitable that the injuries would appear! Many in the group believed that they would have to quit because of their temporary physical discomfort, but the bond that had been created between us was stronger; it was very difficult to leave the group. For various reasons, throughout the training, many believed that they could not continue, but without intending to we inspired each other to continue or simply, extended our arms to help.

Based on my experience I recommend you follow these steps and then tell us how you are doing!

1.- Begin to pay attention to the word running; talk with your acquaintances about your interest in finding a run to complete and seek information about this activity.

2.- Find a source of motivation to start such as a group of runners that you like or a coach you have heard good things about.

3.- Select the race that appeals the most to you that complies with the appropriate training time and your chosen distance.

4.- Choose a training group that will guide you in this first feat. Everything else will flow from there.

In summary, getting started only requires having a goal that keeps you motivated. Once you establish the habit of doing physical activity, you will be your own guide.

This is only the first part in a series of information to help you get started running. We will continue writing about this topic to accompany you in the transition to a healthy lifestyle.

Julieta Li Causi is a Nutritionist and Dietitian, passionate about sports nutrition and running. Julieta has extensive experience in the management of food services for athletes and is currently dedicated to providing that quality of service also to the guests of the hostel she runs in her city of residence. Mérida- Yucatán, Mexico.

This site uses Akismet to reduce spam. Learn how your comment data is processed.

❤️Your relationship with yourself sets the ton

We are almost halfway through November and spots a

October is known as the Breast Cancer awareness mo

Eating seasonally is good for the planet, your wal


Error: API requests are being delayed for this account. New posts will not be retrieved.